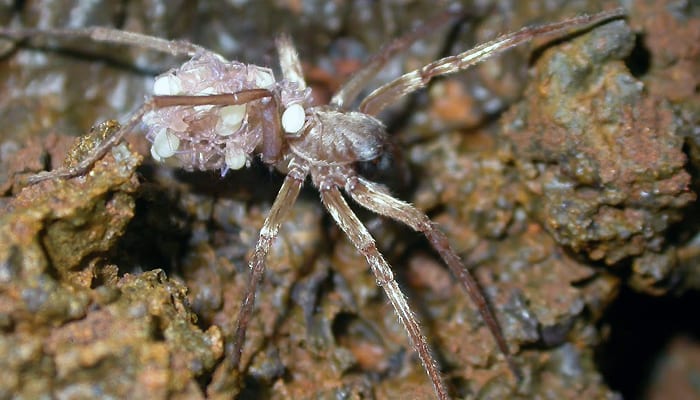 The Kaua’i Cave Wolf Spider is a blind spider found in only a few caves located in the Koloa–Po’ipu region of Kaua’i, Hawaiian Islands, where only six populations have been observed. They are relatively small for wolf spiders, and only reach a body length of around 0.8″ (20 mm). Their above-ground cousins have large eyes, but the Kaua’i Cave Wolf Spider has evolved to no longer need them—it has no eyes, whatsoever. They are completely harmless to people, and instead, prey almost exclusively on a small amphipod found in its environment, which itself is limited to only nine populations in the same area.

Because of their limited range in the caves of Koloa–Po’ipu, the spider is under threat of habitat loss and deterioration. This has resulted from human intervention and activities, which have contaminated their habitat. The biggest threat has been the use of chemical and biological pest controls, which kills their intended prey species, resulting in significant losses to the known populations of the Kaua’i Cave Wolf Spider. They are currently listed as endangered, and efforts are underway to limit their habitat loss to ensure their survival.

The Widemouth Blindcat is a species of catfish found in Texas, and the only member of the genus Satan. Yes, Satan. The species was first identified in a dark well, indicating it evolved to live in a lightless, subterranean environment. It is currently found in only five artesian wells in and around San Antonio, Texas. They lack pigmentation, and as their name implies, they have no visible eyes on the outside of their bodies. They do have eye remnants, suggesting they once had eyes but evolved to no longer need them. Their ocular remnants are incredibly reduced in size, and have little to no trace of a retina or lens, though the optic tract is present, it doesn’t reach the brain.

The Widemouth Blindcat is comparatively smaller than typical catfish and only grows to a length of around 5.4″ (13.7 cm). They have been found with crustacean skeletons in their stomachs, which implies they are a top-tier predator in their environment. Because of groundwater contamination, they are currently listed as vulnerable, and their population has been noted as declining. Conservation efforts are underway, but there are significant challenges due to their limited range to only a small area in central Texas.