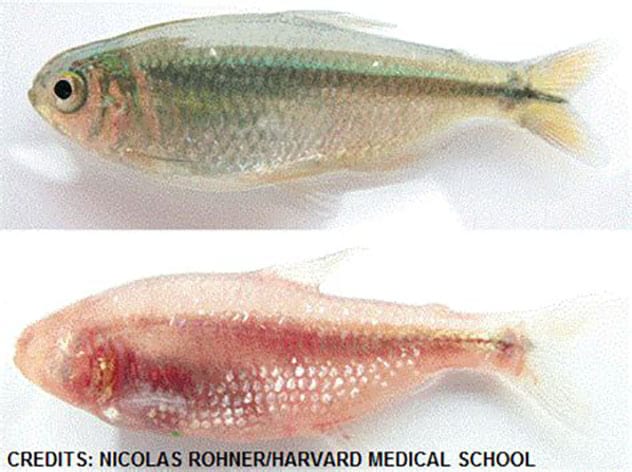 The Mexican Tetra is a species of characin found in the freshwaters of the Rio Grande, the Nueces, and Pecos Rivers in Texas, as well as various bodies of water in the central and eastern parts of Mexico. The fish grow to an impressive 4.7″ (12 cm), which is fairly large for a tetra and has no pigmentation, or eyes of any kind. Like the Brazilian Blind Cavefish, the Mexican Tetra is popular among aquarists, where it is often kept in cave-style tanks requiring minimal illumination.

These fish originally had eyes, as their surface-dwelling cousins still do, but over time, they evolved to lose them. Energy conservation is incredibly important in their environment, and scientists have surmised that they lost their eyes over time, as they no longer needed them. A published study determined that “for young, developing fish, the energy cost of sight is 15 percent greater than if they were blind.” This was due to the energy-hungry needs of photoreceptive cells and neurons, which the fish completely lacks. To compensate for their lack of eyesight, they scoop up and eat everything they come across, including dead animals and plants.[ 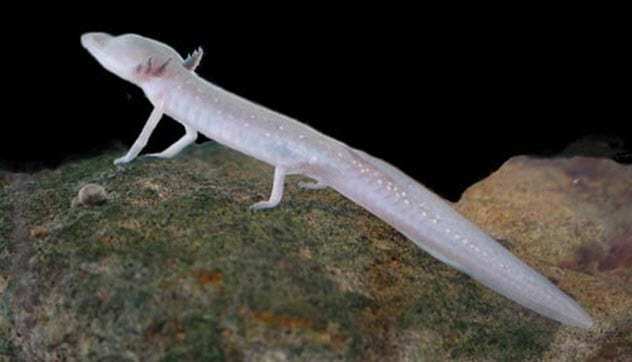 The Texas Blind Salamander is an incredibly rare species of troglobite amphibian found only in San Marcos, Texas, where it can be found in the San Marcos Pool of the Edwards Aquifer. They can reach lengths of up to 5″ (13 cm), and their diet enables them to subsist on whatever happens to flow into its dark environment. This can include a species of blind shrimp, snails, small fish, and anything else they come across. The species was first identified in 1895 when they were extracted from a newly constructed well, which drew water from a depth of 58 meters below the surface. Since that time, they have been studied from seven known locations in and around San Marcos.

Because the Texas Blind Salamander lacks eyes, possessing only subdermal sightless black dots where eyes would normally be, it hunts by sensing water movement in its environment, which is normally completely still. It hunts by moving from side-to-side, as it senses water pressure changes. They are rare, due to their limited range, and because of pollution to the groundwater in their area, their population has been on the decline. The IUCN has listed them as vulnerable, and conservation efforts are underway to protect them in their native habitat.