Stonehenge is part of a wider UNESCO World Heritage Site and an ancient prehistoric monument in Britain (one of many!) that we’re still learning the meaning and significance of.    What’s incredibly impressive is the sheer size and scale of the stones involved and what must have been used to get them to their final destination and in to the stone circle position.  There’s a good audio guide to listen to when you go so you can learn about what historians and archaeologists believe to be the reason for the monument and how they built it.

Stonehenge is located in Wiltshire in southern England.  It’s really easy to reach if you’re touring the country and you have a car.  If you’re just basing yourself in London then you can get there by joining a tour like this one.

England is perfect for history lovers as it has a wealth of history sites from the ancient like Stonehenge and Avebury all the way up through Roman times with many Roman cities and of course Hadrians Wall, Medieval,Tudor and through to World War Two.

I was so close to visiting this one a few years ago but unrest in the country stopped us so it’s still high on the list for me.  The pyramids of Giza are probably the most famous landmark that most people will think about when combining the words ‘ancient’ and ‘bucket list’ and that’s for good reason – they are pretty unique, have a really intriguing history and are recognisable to most people so they’ll at least know what you’re talking about when you show them your travel snaps. 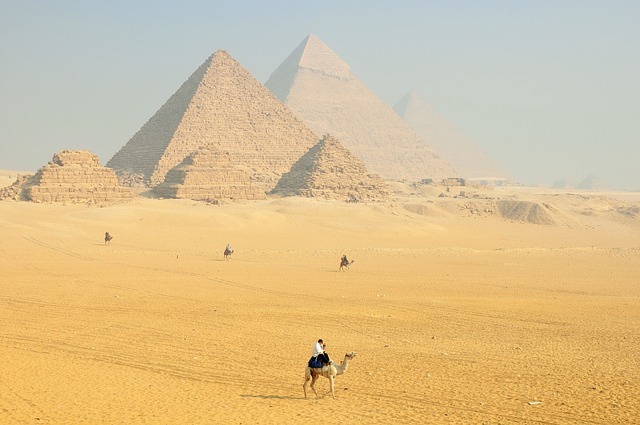 The pyramids were built in the 4th Dynasty period of the Egyptians which is around 2500BC and the largest, the Great Pyramid, was actually the oldest of the original seven wonders of the world – and the only one still standing today.  It’s actually a burial tomb for Pharaoh Khufu (also known as Cheops) and there are smaller pyramids as part of the complex around there, as well as many temples and the Great Sphinx which is world renowned too.

How to get there

Giza is on the outskirts of Cairo which is well accessed by air.  Once in Cairo it’s probably easiest to take a taxi to the pyramids or go as part of an organised tour like this one.